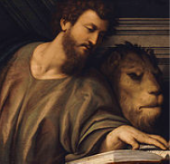 The lion represents Jesus’ resurrection because lions were believed to sleep with open eyes, a comparison with Christ in the tomb

The African Memory of the Gospel of Mark

This Bible Study will focus on the New Testament Gospel of Mark, which is thought to be the earliest gospel. There is a substantial amount of evidence preserved from tradition, much of it not known outside of Africa that Mark himself was from North Africa. He and his mother moved to Jerusalem while he was a youth. He was an eyewitness to the Last Supper and Pentecost. He was related not only to Barnabas but to Peter as well, accompanying him on many of his travels. He later returned to North Africa and founded the church in Alexander. Africa has played a decisive role in the formation of Christian culture from its infancy. Some of the most decisive intellectual achievements of Christianity were explored and understood in Africa long before they were in Europe: The pattern of influence was not from north to south as westerners have assumed, but the other way around. We will study this gospel along with these new sources of information. Additionally, we will consider the early Jewish religious and cultural influences that influenced the writing of Mark. Our goal is to come closer to understanding this gospel, how it was understood by its earliest listeners and its account of Jesus in its first and second century milieu.

In Year B of the Catholic Liturgical Calendar (which is also followed by several protestant churches) the Gospel of Mark is the gospel of the year, beginning with Advent in 2020 and running through 2021, up to Advent 2021. Please go to the FB group, Saint Matthew Bible Study, and join the group. You do not have to be a member of Saint Matthew and there is no cost. There will be a set of handouts made available at the group for the Saint Matthew Facebook prior to the class beginning, and weekly handouts thereafter. No books are required but if you have the resources, we recommend obtaining The Jewish Annotated New Testament, 2nd Edition if you are an ongoing student of the NT. And the book by Thomas Oden (2011), The African Memory of Mark is a key resource for this study.