The Lent of My Life by Meredythe Hutchinson 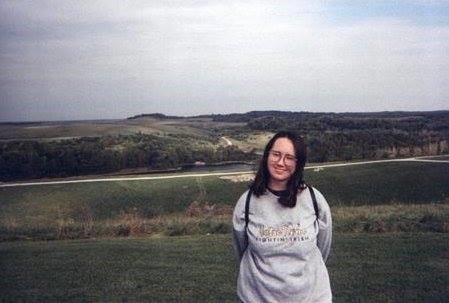 Over the course of six weeks one summer, I came from death back into life. Six weeks – exactly the same length of time as Lent. I don’t think that was a coincidence.

I had been in a very dark place prior to those six weeks. The prior year had brought me through the desert – a failed marriage, an almost-failed senior year of college, and a new medical diagnosis, the combination of which left me depressed and uncertain about my future.

And then I took a job at The Wilds, a place that knew renewal better than almost anywhere on earth.

The Wilds is a wildlife conservation center in Southeastern Ohio. American Electric Power was forced by the Environmental Protection Agency to reclaim the land after they had finished ravaging it for coal. Just a generation before my time, those 9,000 acres were a completely barren wasteland.

Even today, the landscape doesn’t resemble the surrounding lush green forests. It’s been seeded with grasses and wildflowers. Where a giant shovel once destroyed native animal habitats, now there roam giraffes, rhinos, camels, and wild horses. The area looks more like African savannah than Appalachian foothills.

But it is alive, transformed into something beautiful and useful again. And during my brief tenure as an employee there, so was I.

Surrounded by the beauty of nature, I started to feel that I was meant to see the world. That a whitetail buck standing staring at me without fear wasn’t a random event. That the little hummingbird who flitted by my concession stand daily wasn’t there by accident – that it was stopping by to say hello, to grab my attention. Asking me to slow down and be aware. So many times that same message seemed to be reinforced – slow down, stop, pay attention. God was speaking, saying, “Be conscious of your surroundings. Arise from your slumber.”

When one stops for a moment and just lets the world wash over her, she notices the smallest things, the things otherwise missed. I would have missed the trumpeter swans swimming on the lakes. I would have missed watching a redtail hawk glide on the updrafts around the overlook point. I would not have reveled in a rainstorm.

I found during those weeks not just a wildlife refuge, but a refuge for my soul as well. I realized that even the worst damage, the most destroyed parts of anyone or anything can be rebuilt. The decimated can be transformed into something better and grander, with greater, higher purpose. I had hope again, belief that no matter the depths I experience, no matter how desolate the landscape of my soul, there is always a chance for renewal and rebirth – the opportunity to live again.

In my darkest days, I did not believe such re-creation was possible. But if I had given up, I would not have been able to bear witness to my soul’s rebirth. I wouldn’t have been there to enjoy the amazing azure sky, the buttercups, the chicory. I would have missed out on so much that transformed me, made me stronger, braver, wiser, and even happier. I had been looking at myself as a wasteland, not seeing the hidden potential.

I began to see that there are hundreds of opportunities every day for moments of beauty and truth in everyday life. What we must do is slow down and notice them. We become so involved in our routines that we pass right by the beautiful and the true without giving them a second glance.

Thank God for those who had the vision to transform that lonely land into a place where all creatures could not only survive, but thrive. The world was given a place where endangered and threatened species, as well as native ones, are well cared for. And I was given the gift of hope – a reminder that resurrection is real, that there is an Easter coming after the bleakness of Good Friday, for each one of us.

Sun11DecAll DaySunday Masses In Person Indoors and Live Via VideoEvery Sunday at the 9:30 am and 12:30 pm Masses (or at 10:30 am when we have the Unity Mass)(All Day: Sunday)