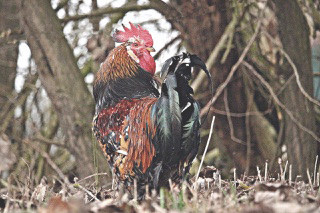 Parishioners had given Father John seven Miorca chicks during the spring
before I came to the farm. By the time I arrived in June, they were already half
grown and were housed in a rather small wire cage in the garage. One of the tasks
during the first part of the summer was to build a large chicken coop for the
roosters to attach to the east side of the barn by the garden. The idea was to put it
up high enough so that the chicken manure could be incorporated into the garden in
an expedient manner. It was a good plan.

Twice I helped clean out the hen house. It was a job that needed to be done
once a month. The cleaning out part was accomplished with shovels and the
wheelbarrow. The hens squawked and flapped around while we scrapped the
concrete taking out the sodden cedar tow. The rewarding part was taking two bales
of fresh cedar tow and spreading it out on the floor of the hen house with pitchforks
and enjoying the fresh smell. The hens even seemed to settle down a little while we
did that part. They would get back up on their roost and the nesting boxes and cluck
away. It really wasn’t a bad job, and I used some of the manure‐laden cedar tow as
fertilizer in my part of the garden.

The trouble with the half‐grown Mioca chickens, it seemed to me, was that
four of them were roosters and only three of them were hens. Even for a
suburbanite, the mathematics of farm life strongly suggested that there were three
more roosters on the farm than needed. Especially after the new chicken coop went
up on the side of the barn and the four black roosters were put there, I questioned Father John about the discrepancy between my chicken calculus and his. “The
roosters stay,” was all that he said.

I pressed the issue in reference to an authentic Taucross Farm chicken
dinner. My somewhat modest proposal was based on my own childhood experience
with chickens. My father had brought home little yellow chicks for Easter one year.
As the eldest child, I was given the first choice in claiming one. The one I picked
turned out to be the only rooster; he grew into a beautiful, large, white bird that I
named Whitey. Whitey was a pet, and he survived long after the five hens were
carried away by the neighborhood cat. Unfortunately for Whitey, one day he came
at me with his spurs. Very soon thereafter Whitey disappeared. About two years
later, I accidentally learned that Whitey had made a most excellent chicken dinner at
my Uncle Emory’s. It took awhile for me to forgive my parents. My mother and her
brother had been raised on a farm. With my father’s consent, they had simply
followed a well known rural tradition in reference to unwanted or extra roosters.

Father John did not cotton to my proposal; but he remained silent as to
reasons. Then one morning when I was not leading Morning Prayer because it was
my reading day and he was the officiant, the gospel reading from Mark gave him the
opportunity to talk about roosters. He reminded us that we could hear them quite
clearly early in the morning from the main house. They are getting quite good at
crowing now. For Father John they are reminders that even before the day has
hardly begun, we can already be so tied up with our own plans and schemes that we
have denied the Lord three times. So, although some people might think that the
roosters should be eaten or that they should be given away, the Taucross roosters
would stay.

Today after morning prayer, I happened to spot four black and red heads
bobbing up and down among the beans and corn in the garden. The door of the
chicken coop had fallen off and our four feathered friends were scratching their way
through the garden. Jan and I had quite a chase. We caught three of them, one in the
beans, one in the corn, and one in the tomatoes. The fourth one hid. I finally saw a
bean plant shake, and the chase was on until we caught the culprit in the squash. It
took about forty‐five minutes to round them all up. I think that Jan would have waited for Father John to go after them if I had not been quite so committed to
recapturing them. It was a fitting form of penance, chasing ruffled symbols of
repentance.