Bees at Midnight: Seeds and Weeds by Mother Diane

COVID-19 update 7/02/21: We are open for public services and liturgies. We will continue to broadcast the Mass online via Facebook. Stay up to date by visiting our homepage, our Facebook page or joining our email list.

“And he said. ‘The kingdom of God is as if a man should scatter seed upon the ground,
and should sleep and rise night and day, and the seed should sprout and grow, he
knows not how. The earth produces of itself, first the blade, then the ear, then the full
grain in the ear. But when the grain is ripe, at once he puts in the sickle, because the
harvest has come.’ “ (Mark 4:26‐29) 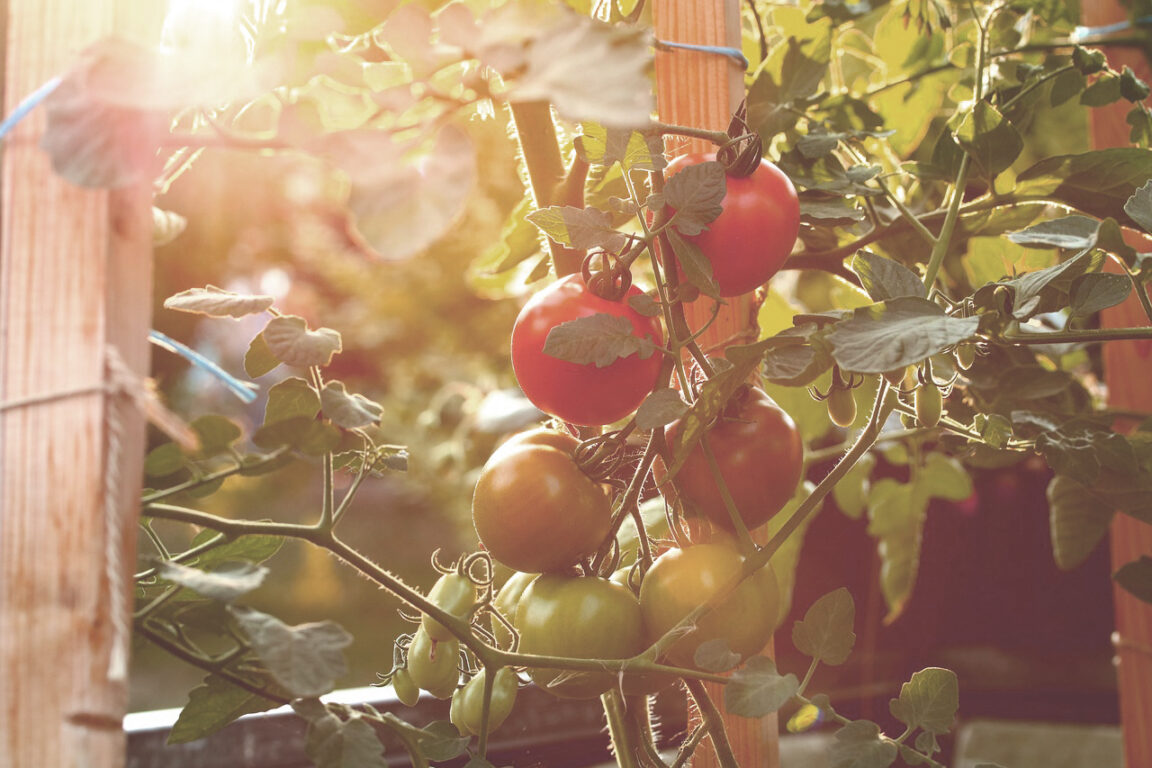 The day after I arrived at the farm, Jill, the Presbyterian intern, and Father
John took me out to show me my part of the garden. Jill had decided earlier in her
internship that she wanted an area o f the garden for her own. So by the time that I
arrived, besides the large common garden there were two areas on the north that
were staked out as Jill’s garden and Diane’s garden. My garden was on the west;
Jill’s on the east. Father John and Jill had already done some planting. We each had
three tomato plants and three green peppers. Two rows of carrots, radishes, and
peas had been planted together. Near the corn, a row of chicken lettuce and some
squash had been put in. One of the most noticeable things about my part of the
garden, even from the beginning, was that it seemed to have fewer weeds in it than
anywhere else. It also had the biggest tomato plant. Father John attributed both
facts to some burning he had done during the fall in that spot. Some of the weed
seeds had been destroyed, and the tomato plant was thriving because of the potash.

Seeing the rather obvious difference between the number of weeds in my
part of the garden and everywhere else for the first time, I chose to believe that God
had been taking care of my garden for me until I arrived. That seemed a safe thing
to say. It also suggested to me that given the gift of the initial condition of my little
area of the earth on the farm. I had a special responsibility to keep care of it. In all
the books on agriculture that I have read over the summer, what I was feeling is
identified as a sense of stewardship of the land.

My father has always had a garden through the spring and summer at my
family home in Fullerton, where I grew up. I never really did very much gardening
as a child, but I watched my Dad level the earth, plant seeds, pull weeds, and make
compost piles. He rotated where he planted things from year to year too. I seemed to have picked up a lot from him just by watching and by experiencing his pleasure
in what he grew. My mother, who was raised on a farm, never could quite
understand how my college professor father could really want to do something like
grow vegetables. She would have been very happy to have purchased everything at
the supermarket, so much so that while I was in high school and college I was often
the one to bring in the vegetables and wash the dirt off of them in the service porch
before bringing them into the kitchen.

The first thing I did when I had a chance to take a careful look at my garden
was to begin to thin radishes. In checking them, I had discovered that, sure enough,
they were beginning to crowd one another and needed to be thinned. Thus,
inadvertently, I was the first one to bring in a harvest from the garden. Jill, in fact
wanted to know what I was doing when I started down a row selectively pulling up
plants. “Thinning,” I said. “What’s that?” was her response. Jill, of course, was from
New York City, and one of her favorite comments was that the farm was the first
place that she had ever seen anything that was green. Often Jill stopped me long
enough to ask about something I was doing, something I had just picked up from
watching my dad over the years. Toward the end of her internship, she told me that
her garden had turned out pretty well for a girl from Brooklyn.

Father John said that I could plant anything in my garden that I wanted to try.
Before too many days had passed, I was behind the barn raking earth into slightly
elevated ridges with about a rake’s width of distance in between. John laughed at
my garden architecture; he had planted his seeds in flat rows. I continued to plant
things as I remembered it being done from my childhood. Soon the space between
the chicken lettuce and the radishes was coming up in red leaf lettuce, spinach,
Swiss chard, bunch onions, and carrots. Since it was an organic garden, I carefully
transplanted little plants that crowded one another in one place to fill out other
spots where something had been munched away by insects or just hadn’t grown. I
needed more room, so I cleared weeds in front of the peppers and tomatoes,
planting more radishes, turnips, spinach, beets, Swiss chard, and miniature zinnias
as a boarder. There were also zucchini and summer squash. My happiest accomplishment came in being able to harvest some summer squash during the last
two weeks of my stay.

I loved the garden, and I shall miss it. It was a place for much contemplative
activity. Just about everything grew. My beets were a disappointment, but so were
those of other gardeners from the parish and we commiserated together.

In the course of watching my garden grow, I began to take particular interest
in the weeds. Weeds, I discovered, had a way of trying to disguise themselves as
something we wanted to grow. Jan had been out weeding the potatoes in the
common garden one morning. It was not until several days later that I noticed two
large weeds near where I was working that had eluded her keen eye. They were
pretending to be potatoes, and they were doing a good job at it. It took a double
take before I recognized them for what they were and pulled them up by the roots.
Similarly, I was particularly struck by the similarity between baby carrots and dog
fennel. Pulling out the weeds while not uprooting what I wanted to grow required a
constant and patient vigilance, which occupied many an hour over the summer.

My reward, of course, was bringing harvests in from the garden. One night
when all of Jan’s relatives were here all the fixings for the salad had come from my
little plot of ground. One of Jan’s young nieces helped me chop vegetables, clean
lettuce and tear it up. Before dinner for the twenty‐five of us present, I announced
that the Lord, Liza, and I had provided the salad. God forgave my pride.

Sun01AugAll DaySunday Masses In Person Indoors and Live Via Video9:30 a.m. in English and 12:30 p.m. in Spanish(All Day: Sunday)

Attend Mass in Person (inside the church) English and Spanish Beginning Sunday February 14th, all are welcome to attend Mass indoors again. Please note that Mass will no longer be held

Beginning Sunday February 14th, all are welcome to attend Mass indoors again. Please note that Mass will no longer be held outdoors, only indoors and online. Join us at 9:30 a.m. (English) and 12:30 p.m. (Spanish). We will be keeping with the recommended practices listed below for everyone’s safety and as per California COVID guidelines. We look forward to seeing you all again inside our beautiful church sanctuary!

Click on the link below at 9:30am PST (English) or 12:30pm PST (Spanish). Please note that you may need to refresh the page to see the live video.

St. Matthew’s Social Justice and Outreach ministry will begin collecting food and toiletry donations weekly at the 9:30 am and 12:30 pm masses. Donations can be left at the church

St. Matthew’s Social Justice and Outreach ministry will begin collecting food and toiletry donations weekly at the 9:30 am and 12:30 pm masses. Donations can be left at the church door closest to the outdoor-mass tent. Donations needed include healthy canned and dried food, toiletries, sanitizing and cleaning supplies, diapers (adult and children) and baby wipes. This collection supports working-poor families of our community and is distributed by Western Service Workers Association of Santa Ana.

During the Covid-19 crisis, Parish Council meetings are being conducted via Zoom at with the details below. Please email Parish Council Moderator Bob Moranno at obofzcpp2020z@tznvy.pbz to be given access to the meeting.

Win dinner for up to six people prepared by some of our St. Matt’s clergy! Appetizer, dinner, and dessert to be prepared in your home or location to be announced.

Win dinner for up to six people prepared by some of our St. Matt’s clergy! Appetizer, dinner, and dessert to be prepared in your home or location to be announced. This is a fun way to get to know your priest and deacons!

Drawing to take place at the August 29th Unity Mass.

Tickets are only $20 and can be purchased through any member of the Community Life Committee.